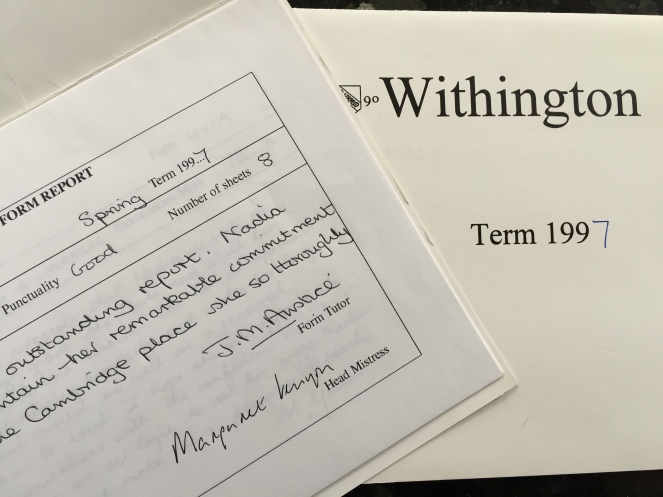 You know you’re getting on when you receive an invitation to attend your High School Reunion. But this wasn’t just any old invitation. It wasn’t simply for a quick catch up and some snapchat selfies over coffee. This was for the Mother of all Reunions: The 20 Year Biggie. A chance to reconnect, reminisce and rekindle old friendships. An opportunity to transcend time and pick up where we last left our shared past. What could possibly be uninviting about that? But after 20 years and almost a whole lifetime of further education, new friendships, careers, marriages, births and even deaths, it came somewhat as a bolt out of the blue. I wasn’t expecting it. I wasn’t prepared for it. And it was most certainly not on my agenda.

Needless to say, I had to consider this one carefully. And the more I considered it, the more it became clear that this wasn’t simply a decision about whether or not to meet up with old friends, in a setting which had had such a hugely positive impact on me growing up. That was the easy part. In fact, there were layers upon layers of deeper complexities, knitting together issues surrounding my own self-identity, fears, personal pressures, expectations and long-lost dreams. Should I choose to accept the invitation, I knew that I would be entering into a period of self-reflection and of heightened self-awareness, as I battled to find some shred of continuity between my past and present lives. I was sure to ask myself the same tired, old questions. How have I reached this point, what have I done correctly, what could I have done differently and do I even have a brain any more? Should I choose to politely decline however, I knew that I would remain safe and secure in the snuggly, warm comfort zone of my children’s arms, without subjecting myself to the scrutiny of others, who may well remember me differently and whose opinion of me may well change. I was definitely leaning towards the easy option, but as the fascinating sociology behind a potential “Reunion” unravelled, I was feeling torn. Torn amidst a tussle of two very different life-stories: that of then and that of now. Who would ever have imagined the prospect of a High School Reunion to stir up such conflicting thoughts and emotions? Whatever choice I was to make, it was probably going to be the wrong one.

However, without further ado, I decided to go. Sod it! Worst case scenario, I would remember no-one and no-one would remember me, but at least we’d all enjoy tea and old-fashioned puddings in the canteen, before sodding off back to our real lives, erasing this ghastly experience from all living memory, without gaining a single new Facebook friend in the process. Surely it was worth the risk for a touch of spotted dick in the canteen? (At this point, it’s worth mentioning that sadly, there was no spotted dick, syrup sponge or cornflake cake, for that matter, anywhere in the vicinity. Instead, the 20 or so honoured guests were treated to miniature petit-fours and delicate slithers of assorted cake, prepared by none other than the school’s newly appointed, dedicated pastry chef. (Really? Yes). The school had always been a centre of excellence, but this was on another level.) All I can say is, Thank Goodness for name tags. This, along with the fact that every face was basically as it was 20 years ago but sitting on a grown-up, more well-groomed body, meant that no-one had cause to forget anyone. Not even me.

But there was another worst case scenario. What the hell was I going to say to these people? What small-talk could possibly begin to fill the 20 year chasm in the short allocated two hour window? And how does one even initiate small-talk after 20 long years crammed full of accomplishment, success, failure, drama and adventure? With precisely that. Small-talk. Sensitively placed, non-leading chit chat for a start. In fact, I came to the conclusion that the less said the better. The fewer questions I asked, the fewer would be asked of me. And for fear of sounding like a rude cow, it was well worth the risk. For the truth of the matter was, I believed my own life narrative would be far less interesting than anyone else’s. Let’s face it, which gifted and talented Withingtonian had #FTM (full-time Mum) status at the top of their “Want To Be” list 20 years ago? I hadn’t become the high-flying professional that so many of my peers had. My “stay at home” profile didn’t match up to conventional conceptions of what society deemed the “standards” for success and achievement. And when asked “What are you doing these days?”, all that my lips could utter was “Nothing!” Oh dear, oh dear. Aside from being so far removed from THE TRUTH, what on earth could one expect in response to that? I wanted to curl up and crawl under a stone. Never had I felt so alone.

Fortunately, I made that mistake only once and after that, I kept my mouth firmly shut. But instead of focussing on the, quite frankly, immaterial and superficial changes that had inevitably become of all of us, such as who had put on the most weight, whose hair was the greyest and who had the saggiest boobs, what became abundantly clear were the continuities that we all shared. As we crossed the same old floor-boards, sat in the same old places and stared at the same old walls, the same (but older) faces lit up and the same (but older) personalities shone through. And as we toured the school a full 20 years after we couldn’t wait to graduate from it, we lingered in the corridors like mischievous young girls again, desperate to inhale a single, memorable smell, or to feel a fleeting, familiar sensation that we could cling onto and immortalise forever. The ripples of excitement, the waves of emotion and the surges of memory created as we trod in our own footsteps, were palpable.

So when I received an invitation to my 20 year High School Reunion, I wasn’t expecting it, I wasn’t prepared for it and it was most certainly not on my agenda. To say I wasn’t anxious is a complete falsehood. To say I hadn’t memorised the list of attendees is a big, fat lie. And to say I hadn’t rehearsed the script containing my life-story thus far, is also far from the truth. But Apparently This is Normal. It seems that to question whether or not “To Go,” is much more common than I could possibly have anticipated. Perhaps the other women, with whom I had shared much more than disappointment over the lack of spotted dick on the menu, also shared the same anxieties, insecurities and fears as I had. Perhaps I wasn’t so alone at the High School Reunion after all. Well, here’s hoping at any rate. And as I clambered into my shit-tip of a 7-seater and made my way back home into the comfortable embrace of anarchy, I felt momentarily proud. Proud of what I had achieved 20 years ago. And proud of what I had achieved just a few hours ago, simply by Reuniting. Fleeting feelings they may well have been, but feelings that can never be unknown.

Published by Apparently This is Normal

A mum of three documenting her quest for normality amid the chaos and insecurity of parenthood. View all posts by Apparently This is Normal

Does my scale of normality mean anything to you? Cancel reply