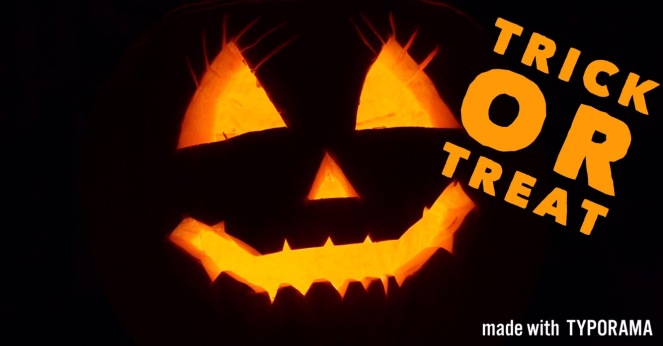 So, here we are again, it’s Halloween. Tonight, the Eve of All Hallows’ Day, marks the start of a three-day period in which we are expected to remember and revere Saints, Martyrs and all things dead and cold. A time in which we are supposed to exchange soul cakes for prayers to protect our deceased. I say “supposed to,” because clearly these days, Halloween is less about the deceased and more about those very much alive and kicking little souls in our lives: The Kids.

For the kids, Halloween is about living it up “Frankenstyle,”competing over who has the most chilling costume on the block and over how much popping candy can be crammed into a plastic skull and then consumed in one night only. It is a child’s once-a-year opportunity to justifiably beg for sugar and then behave like a demonic, frenzied little shit on speed. For everyone else, it’s just an expensive and irritating pain in the arse, built up for weeks but done and dusted in a few hours. Unless, of course, you are The Wicked Witch of the West. One of those Super Duper Mums who can whip up shortbread spiders, monster marshmallows and ghoulish ganaches out of thin air, the Wonder Woman who can plan and execute “The Best Halloween Party Ever,” whilst holding down a full-time job and breastfeeding a new-born baby or quite frankly, The Bitch from Hell, who somehow manages to look Super-Hot in gothic-style makeup and a see-through sodding corpse-bride costume.  I very much wish I could be one of “them”. But sadly, this Mummy is no trickster.

Instead, this Mummy has been psyching herself up for tonight. In fact, this Mummy has been having terrifying nightmares about tonight for weeks. Because this Mummy is still the Grim Reaper forward-slash Miserable Cow that Daddy labelled her long ago, and given the choice, this Mummy would rather mummify herself in soggy toilet paper and bury herself underground in a coffin, rather than Do Halloween. Sadly Mummy doesn’t have the gift of choice any more and whilst Daddy is sodding off to watch His “Red Devils” pretending to kick a football around, Mummy is left in charge of protecting Her little red devils and the family home, from evil spirits, dodgy-looking demons and puerile pranksters, all on her own. Mummy, who breaks out into a cold sweat at the thought of opening the door to the postman, is not looking forward to receiving random late-night callers, and plans to trick everyone by parking her car at the neighbour’s and hiding herself in the chocolate and other assorted crap cupboard, leaving NO SIGN OF LIFE HERE.

In her defence, should she pluck up enough courage to open the door by a few millimetres, enough to poke her nose out, Mummy won’t have to try overly hard to be utterly terrifying. For the solitary skeletal-hand-brandishing-paring-knife, which sticks out from within her long, black cloak (otherwise known as The Dressing Gown), is enough to scare even the most monstrous of monsters away. Needless to say, when considering what blood-curdling attire would be suitable for such a night, Mummy quickly realised she could save Daddy the £25 cost of a dead bride’s costume and simply dress up as none other than Herself.  Failing that, she could still dress up as herself, pocket the cash and treat herself to a brand new, bright pink coat.

Published by Apparently This is Normal

A mum of three documenting her quest for normality amid the chaos and insecurity of parenthood. View all posts by Apparently This is Normal

One thought on “Trick or Treat?”

Does my scale of normality mean anything to you? Cancel reply